Any suggestion regarding development of SNATTA westbengal …. pl. mail to our cs in e-mail ID snattawb.cs@gmail.com or to our CP at mail snattawb.cp@gmail.com

Meeting started with the speech of Mr. Abhishek Rana / Circle Working President and addressed the members of ASL SSA, he briefly described all the burning issues of JEs. Mr Himanshu ShekharJha / Circle Secretary addressed the meeting and described the points of Agenda of the meeting. He focused on JTO LICE, HR related issues of JEs, Post VRS scenario and current restructuring order, Standard Pay Scale of JEs in PRC, Circle Secretary also appreciated all the JEs of ASL SSA for being present in the meeting.

Very good discussions were made by every member about all important agenda points.

After that new District/ SSA body of SNATTA ASL SSA has been formed. The Details are as follows:-

Meeting started with the speech of Mr Abhishek Rana / Circle working president and addressed the members of COB SSA, he briefly described all the burning issue of JEs.Mr. Himanshu Shekhar Jha / Circle Secretary addressed the meeting and described points of agenda of the meeting. He focused on JTO LICE, HR related issue of JEs , Post VRS scenario and current restructuring order, Standard Pay Scale for JEs in PRC. Circle Secretary also appreciated all the JEs of COB SSA for being presnt in the meeting.

Very good discussion  were made by every members about all important agenda points. After that new District/SSA body of SNATTA COB SSA has been formed. The details are as follows :-

19-02-2022- Letter to DIR(HR) reg- justification of staff strength and structure of WBTC from CGM/WBTC.

Organizational restructuring- Justification of staff strength and structure of  WBTC-reg.

Posted by cssnattawb at 2:39 AM

Casting round for the anticipation with homogenous approach from circle authority to mark their protest in fovour of SNATTA against injustice caused to JE Cadre regarding their carrier progression by abolishing the vacancies and bypassing the VY 2018-19 and VY 2019-20 JTO(T) LICE.
click here for letter
Posted by cssnattawb at 2:14 AM

Posted by cssnattawb at 3:47 AM

Formal meeting of SNATTA WB delegates with Hon'ble CGM/WB along with GM(HR) and other circle administration of WBTC on 21st Jan'2022. 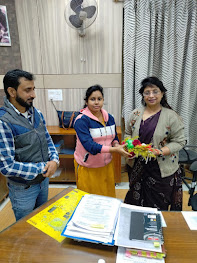 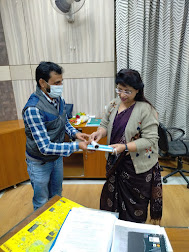 It is  intimated to all of you that Our Circle SNATTA team leaded by  Mr.Himanshu Shekher Jha/CS-SNATTA WB and Mr. Priya Ranjan Kumar VP/SNATTA WB cum OS/SNATTA CHQ  along with Ms. Kabita Saha/Member SNATTA greeted New Year wish to our Hon'bl CGM Mam Mrs .Madhu Arora  and GM (HR&ADMN) Mr.P.K Singh  on 21st Jan'2022 . A Diary and Calendar of SNATTA is presented to them with best wishes .CGM madam is pleased to meet with the representatives of JEs and expressed her satisfaction over the performance of JEs in WBTC and wishes all JEs a positive Year through the Team.Later Our CS SNATTA WBTC ,Mr. Himanshu Ji expressed his willingness to represent development and HR Matters of BSNL and JEs and She immediately agreed to hear us and asked to get appointment for detailed discussions .

Later the Team Met GM/ HR sir and wished him a Happy New Year with Diary and Calendar and a detailed discussions is also expected from him via suitable appointment regarding HR issues of JEs and He immediately agreed on it .

Next the Team met with AGM/HR ,SDE/HR and presented them Diary and Calendar to wish New year.

This Quick New Year Greeting Meeting has ended with a lots of Positive aspects and SNATTA WBTC will seek appointment from CGM Madam and GM/HR for detailed discussion on Development and HR issues as agreed by them.
Posted by cssnattawb at 3:49 AM 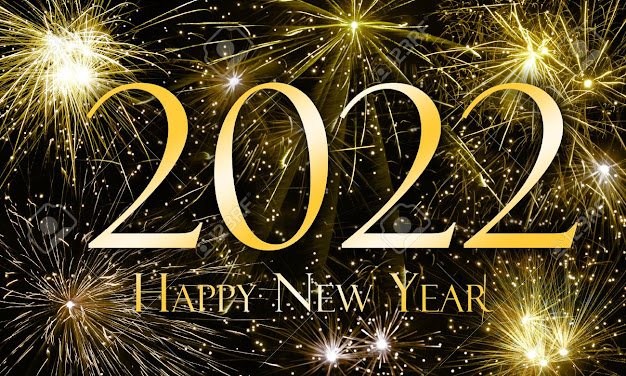 Posted by cssnattawb at 3:28 AM 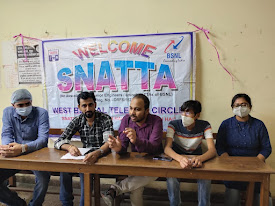 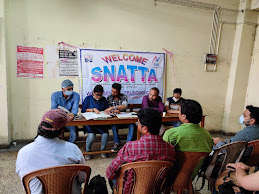 related issues and thereafter , Refund of Security  Deposit of NEW JEs are also scrutinized as most of the cases are settled. NEW SSA Body of Jalpaiguri is being proposed during the ongoing    process infront of the house. Moreover , He urged each and every DR JEs to get united and to maintain the utmost UNITY among the JE Cadre.
Later on , Mr. Priya Ranjan Kumar /VP-SNATTA WBTC and Mr.Vikash Kr Jaiswal -ACS/ SNATTA  WBTC also addressed the house  subsequently followed by other Executive Members  and Representatives of other SSAs. 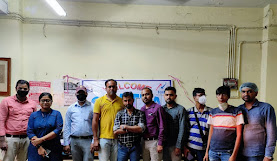 Then Mr. Abhishek Rana and Mr. Himanshu Shekher Jha along with the whole House Welcomed Mr. Suresh Kumar/GS-SNATTA CHQ and requested him to enlighten some facts about the proceedings and He elaborately discussed the agendas of the meeting and CHQ’s proceedings on it .He mainly highlighted on the fact of Restructuring ,JTO LICE and in NEPP issue and asked for full cooperation to make it success and also stated the stand on the 3rd PRC wage Negotiation infront of the Management and Recognized Unions to get the best possible Pay Structure and further to avoid any kind of Pay Loss to DR JEs. He concluded with the appreciation of the activities being carried out by the SNATTA WB.

Getting all the points, Mr. Himanshu Shekher Jha /CS-SNATTA WBTC  summarized all the agenda points and other issues raised by the members and discussed all the issues in details. He again gave the full focus on JTO LICE matter and sanctioned post VRS Strength after Restructuring and urged GS/SNATTA to take special initiative to make it happen at the earliest and also expressed the full hearted support ,on behalf of SNATTA WB, in any kind of UNITED fight for the right JEs in near future. In continuation, He discussed some details on the Circle related issues like Pending Confirmation Cases of NEW JEs and Security Deposit Refund cases . As He is in constant touch with Circle Management to get it clear  within short frame of time as per the information received from the Members. He also mentioned the fund status taking reference of the statement being made by the Circle Treasurer and asked every SSA to cooperate.

He concluded his speech by appreciating the Newly Elected District Body SNATTA Jalpaiguri  and recommended for its Official approval to SNATTA CHQ and asked all JEs of West Bengal to be united for the upcoming Hurdle by taking Oath to give full support to CHQ in their proceedings for the welfare of JEs.

The Meeting was concluded with a Vote of Thanks by Mr. Abhishek Rana-CWP/SNATTA WBTC.

Posted by cssnattawb at 5:57 AM

An important Circle Executive Committee Meeting of SNATTA WB is being called and it is intimated to all well before time. Each Executive members(Dist.Secretary,Dist.President, Dist. Treasurer  of all SSA & all member of circle body)are requested to attend this meeting at any cost and arranged yourself in your office . So that you will be free to attend the meeting.
GS/SNATTA is invited to attend the meeting.
Agenda of the meeting: -
1. Discussion regarding JTO LICE
2. Financial Report
3 Development of BSNL after post VRS.
4. Fund collection status and membership analysis of each SSA.
5.Any other issues raised by the house.
DATE- 30th October '2021(Saturday).
TIME- 01:00 PM onward.
VENUE- Recreation Club Room,9th Floor, Telephone Kendra, Territy Bazar, Kolkata.
Thanks & Regards.
Posted by cssnattawb at 3:16 AM 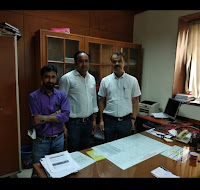 During the Visit of Corporate Office, Suresh Kumar/GS along with Himanshu Shekher Jha/CS WBTC and Prashant Prabhat had a meeting with Mr. Manish kumar, GM(Restructuring) at first and It was learnt that the finalisation of Restructuring is on the hand of CMD and DIR(HR) and his office has no idea of its exact time line. when it was asked about the JTO LICE, He answered it can be possible after Restructuring, but they have no idea about the out of turn decisions taken for JTO to SDE Promotion prior to Restructuring as the decision has been taken by CMD and DIR (HR) .Next we have discussed about NEPP issue, He agreed  and made it clear that there is no any relation between restructuring and NEPP. The issue is genuine and it may be discussed with DIR( HR) for the settlement.
After getting no fruitful reply, We had a long conversation with Mr. Saurabh Tyagi/ GM (ESTT.) regarding the same, his answer is same that it can be possible after Restructuring and when asked about the exceptional case of JTO to SDE promotion order prior to Restructuring, His answer is also same as GM (Restructuring) to refer CMD and DIR (HR).We discussed regarding vacancy anomaly created by giving JTO to SDE promotions prior to Restructuring made confusing situation to conduct JTO LICE as practically no vacancy is there to promote. After that we told all the details regarding anamoly in NEPP for direct recuitee JEs. Again He demanded to submit about the anomalies in NEPP and our proposal for the reformation in the policy in written clearly, we have told him the proposal will be submitted as soon although many letters have been written before for the same.
We also met with Mrs. Smita Luthra, GM(Rectt), As per GM (Recruitment), She is prepare to conduct exam as soon as direction received from establishment section. No any delay will happen from her side:
Lastly we have discussed with GM(SR), Mrs. Anita Johri for the appointment of DIR (HR) for the discussion regarding HR related issues and also we told her everything in details, after discussion she told us that she will inform  for the formal meeting with DIR(HR) as soon.
Any decision will be taken for the next steps after the meeting with DIR (HR) but we have to be prepare for full support to our beloved Association in every way if we want justice and welfare for JE Cadre
Thank you.
Posted by cssnattawb at 3:31 AM
Older Posts Home
Subscribe to: Posts (Atom)

All members are requested to submit the membership fee.

For sending any type of fund pl contact details: